The son of a maid and a coal miner, William Harrison Withers Jr. was born in Slab Fork, West Virginia on July 4, 1938, and was raised in nearby Beckley, He wrote his first song at the age of four, but his talent wouldn’t truly manifest for another three decades. Withers spent his late teens and most of his twenties in the U.S. Navy, where he served as an aircraft mechanic. Discharged after nine years of service. Withers relocated to San Jose, where he worked as a milkman, made aircraft parts, and eventually worked on planes. While at an Oakland club to see legendary singer Lou Rawls, Withers was motivated to buy a guitar and develop his singing and writing skills. Withers soon made his recorded debut with the self-composed “Three Nights and a Morning”, an up-tempo hardscrabble shouter produced, arranged, and released in 1967 single was a one-off. A little later, having moved to Los Angeles and landed another aircraft mechanic job. Some say that Mr. Withers worked at Boeing in Seattle on the assembly line a toilet installer.

Withers invested in a recording a demo and was signed by Sussex Records. His self-financed demos on which Watts 103 rd street band member Ray Jackson served as arranger and Keyboardist, led Jackson to introduce him to Forrest Hamilton, Hamilton then introduced Withers to Clarence Avant of Sussex Records who tapped Booker T. Jones to produce Bill’s debut album. This resulted in the album Just as I Am with the Grammy-winning “Isn’t No Sunshine” and the much loved “Grandma’s Hands”. The second album, Still Bill, lauded as “a stone-soul masterpiece” with hits like “Lean on Me” and “Use Me”. Bill Withers Live at Carnegie Hall followed. After the release of Justments in 1974, Withers served ties with Sussex to sign Columbia and re-released his back catalog. In 1975 Withers released his third album Making Music, Making Friends showcased more classics, “Hello Like Before” and Make Love to Your Mind”; His fourth album in 1976’s Naked & Warm, with the idyllic love song to his adopted home, “City of the Angels” His fifth studio album which was released in 1977’s entitled Menagerie, with the much-covered song by Bill Withers a Lovely Day. In 1979, Withers released ‘Bout Love’, and the single “Don’t It Make It Better”, a top 30 R&B single, continued the run of top-charting releases. “Just the Two of Us” with Grover Washington, Jr. was a career pinnacle, garnering four Grammy nominations with Withers accepting the award for Best R&B Song. “Soul Shadows” with the crusaders marked an additional collaborative project of the period and “In the name of love” with Ralph MacDonald received a 1984 Grammy nomination for vocal performance. In 1985 Withers marked his final project for Columbia with Watching You, Watching Me and the R&B chart single, “Oh Yeah”. I can’t go back to my past; I need somewhere to grow. – “City of Angles”

Inducted into the Songwriters Hall of Fame in 2005, Bill Withers was honored by the American Society of Composers, Authors and Publishers in 2006 with the Society’s Rhythm and Soul Heritage Award, presented to ASCAP members who have had a major impact on the legacy of Rhythm and Soul music. Additional honors include multiple Million-airs citations from Broadcast Music Incorporated (BMI); a Soul Train Hall of Fame award; two NAACP Image awards, induction into the West Virginia Music Hall of Fame, and a Clio award. In 2007, “Lean on Me” was enshrined in the Grammy Hall of Fame. Withers was inducted into the 2015 Class of the Rock and Roll Hall of Fame by Stevie Wonder, John Legend performing his songs, and in 2017 received the prestigious International award of the Ivor Novella Awards in England. As resounding as these honors might be, they are eclipsed by the eloquence of spirit that defines the songs. While he prefers a life far removed from the hype and the hoopla, in the collective consciousness of popular music, the sound and the songs of Bill Withers are ever present. 50 years since his debut, Bill Withers’ songs echo as vibrant touchstones in the American musical experience. “I write and sing about whatever I am able to understand and feel. I feel that it is healthier to look out at the world through a window than through a mirror. Otherwise, all you see is yourself and whatever is behind you”. 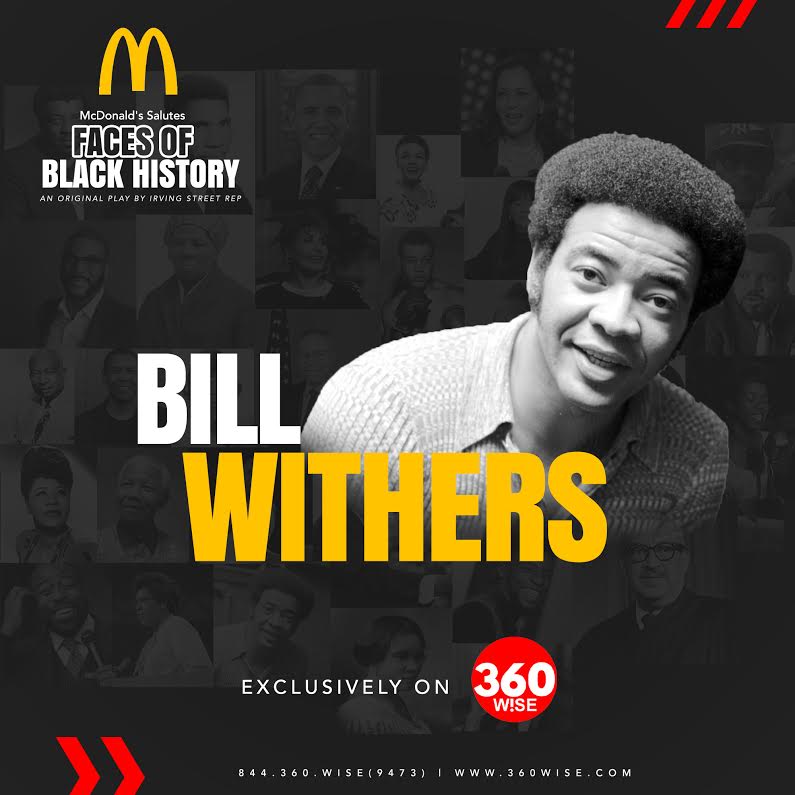 • Bill Withers was born in Slab Fork, West Virginia on July 4, 1938
• He wrote the Grammy-winning “Isn’t No Sunshine”
• He was inducted into the 2015 Class of the Rock and Roll Hall of Fame by Stevie Wonder