Carver was most likely born in 1864 enslaved in Diamond, Missouri, during the Civil War years. Like many children of enslaved, the exact year and date of his birth are unknown. Carver was one of many children born to Mary and Giles, an enslaved couple owned by Moses Carver. A week after his birth, Carver was kidnapped along with his sister and mother from the Carver farm by raiders from the neighboring state of Arkansas.

The three were later sold in Kentucky. Among them, only the infant Carver was located by an agent of Moses Carver and returned to Missouri.

The conclusion of the Civil War in 1865 brought the end of slavery in Missouri.

Moses and his wife, Susan, decided to keep Carver and his brother James at their home after that time, raising and educating the two boys. Susan Carver taught Carver to read and write since no local school would accept Black students at the time.

The search for knowledge would remain a driving force for the rest of Carver’s life. As a young man, he left the Carver home to travel to a school for Black children 10 miles away.

It was at this point that the boy, who had always identified himself as “Carver’s
George” first came to be known as “George Carver.” Carver attended a series of schools before receiving his diploma at Minneapolis High School in Minneapolis, Kansas.

Accepted to Highland College in Highland, Kansas, Carver was denied admittance once college administrators learned of his race. Instead of attending classes, he homesteaded a claim, where he conducted biological experiments and compiled a geological collection.

While interested in science, Carver was also interested in the arts. In 1890, he began studying art and music at Simpson College in Iowa, developing his painting and drawing skills through sketches of botanical samples. His obvious aptitude for drawing the natural world prompted a teacher to suggest that Carver enroll in the botany program at the Iowa State Agricultural College.

Carver moved to Ames and began his botanical studies the following year as the first Black student at Iowa State. Carver excelled in his studies. Upon completion of his Bachelor of Science degree, Carver’s professors Joseph Budd and Louis Pammel persuaded him to stay on for a master’s degree.

His graduate studies included intensive work in plant pathology at the Iowa Experiment Station. In these years, Carver established his reputation as a brilliant botanist and began the work that he would pursue the remainder of his career.

After graduating from Iowa State, Carver embarked on a career of teaching and research. Booker T. Washington, the founder of the historically Black Tuskegee Institute, hired Carver to run the school’s agricultural department in 1896.

Washington lured the promising young botanist to the institute with a hefty salary and the promise of two rooms on campus, while most faculty members lived with a roommate. Carver’s special status stemmed from his accomplishments and reputation, as well as his degree from a prominent institution not normally open to Black students.

The agricultural department at Tuskegee Institute (now Tuskegee University) achieved national renown under Carver’s leadership, with a curriculum and a faculty that he helped to shape.

Areas of research and training included methods of crop rotation and the development of alternative cash crops for farmers in areas heavily planted with cotton. This work helped under harsh conditions including the devastation of the boll weevil in 1892.

The development of new crops and diversification of crop use helped to stabilize the livelihoods of people, many former enslaved who had backgrounds not unlike Carver’s own. The education of African American students at Tuskegee contributed directly to the effort of economic stabilization among Black people.

In addition to formal education in a traditional classroom setting, Carver pioneered a mobile classroom to bring his lessons to farmers. The classroom was known as a “Jesup wagon,” after New York financier and Tuskegee donor Morris Ketchum Jesup.

Carver went on to become a prominent scientific expert and one of the most famous African Americans of his time. Carver achieved international fame in political and professional circles. President Theodore Roosevelt admired his work and sought his advice on agricultural matters in the United States.  Carver was also recognized abroad for his scientific expertise. In 1916, he was made a member of the British Royal Society of Arts — a rare honor for an American. Carver also advised Indian leader Mahatma Gandhi on matters of agriculture and nutrition.

Carver used his celebrity to promote scientific causes for the remainder of his life. He wrote a syndicated newspaper column and toured the nation, speaking on the importance of agricultural innovation and the achievements at Tuskegee.

Carver’s work at the helm of the Tuskegee Institute’s agricultural department included groundbreaking research on plant biology, much of which focused on the development of new uses for crops including peanuts, sweet potatoes, soybeans and pecans.

Carver’s inventions include hundreds of products, including more than 300 from peanuts (milk, plastics, paints, dyes, cosmetics, medicinal oils, soap, ink, wood stains), 118 from sweet potatoes (molasses, postage stamp glue, flour, vinegar and synthetic rubber) and even a type of gasoline. At the time, cotton production was on the decline in the South, and overproduction of a single crop had left many fields exhausted and barren.

Carver suggested planting peanuts and soybeans, both of which could restore nitrogen to the soil, along with sweet potatoes. While these crops grew well in southern climates, there was little demand. Carver’s inventions and research solved this problem and helped struggling sharecroppers in the South, many of them formerly enslaved now faced with necessary cultivation.

Contrary to popular belief, Carver did not invent peanut butter. However, he did do a lot of research into new and alternate uses for peanuts.  He even became known as the “Peanut Man” after delivering a speech before the Peanut Growers Association in 1920 attesting to the wide potential of peanuts. The following year, Carver testified before Congress in support of a tariff on imported peanuts, which Congress passed in 1922.

Carver also spoke about the possibilities for racial harmony in the United States. From 1923 to 1933, Carver toured white Southern colleges for the Commission on Interracial Cooperation.

However, he largely remained outside of the political sphere and declined to criticize prevailing social norms outright. This made the politics of accommodation championed by both Carver and Booker T. Washington anathema to activists who sought more radical change. Nonetheless, Carver’s scholarship and research contributed to improved quality of life for many farming families, making Carver an icon for African Americans and white Americans alike.

Carver died after falling down the stairs at his home on January 5, 1943, at the age of 78. He was buried next to Booker T. Washington on the Tuskegee grounds. Carver’s epitaph reads: “He could have added fortune to fame, but caring for neither, he found happiness and honor in being helpful to the world.”

Carver, who had lived a frugal life, used his savings to establish a museum, the George Washington Carver Museum, Cultural and Genealogy Center in Austin, Texas, which was devoted to his work, including some of his own paintings and drawings. In December 1947, a fire broke out in the museum, destroying much of the collection. One of the surviving works by Carver is a painting of a yucca and a cactus, displayed at the Chicago World’s Columbian Exposition of 1893. In addition to the museum, Carver also established the George Washington Carver Foundation at Tuskegee, with the aim of supporting future agricultural research.

A project to erect a national monument in Carver’s honor also began before his death. Harry S. Truman, then a senator from Missouri, sponsored a bill in favor of a monument during World War II.

Supporters of the bill argued that the wartime expenditure was warranted because the monument would promote patriotic fervor among African Americans and encourage them to enlist in the military. The bill passed unanimously in both houses.

Carver’s iconic status remained after his death. In 1943, Roosevelt dedicated $30,000 for the monument west of Diamond, Missouri — the site of the plantation where Carver lived as a child. This was the first national monument dedicated to an African American. The 210-acre complex includes a statue of Carver as well as a nature trail, museum and cemetery.

Carver appeared on U.S. commemorative postal stamps in 1948 and 1998, as well as a commemorative half dollar coin minted between 1951 and 1954. Numerous schools bear his name, as do two United States military vessels.  In 2005, the Missouri Botanical Garden in St. Louis opened a George Washington Carver Garden, which includes a life-size statue of the garden’s famous namesake.

These honors attest to Carver’s enduring legacy as an icon of African American achievement, and of American ingenuity more broadly. Carver’s life has come to symbolize the transformative potential of education, even for those born into the most unfortunate and difficult of circumstances. 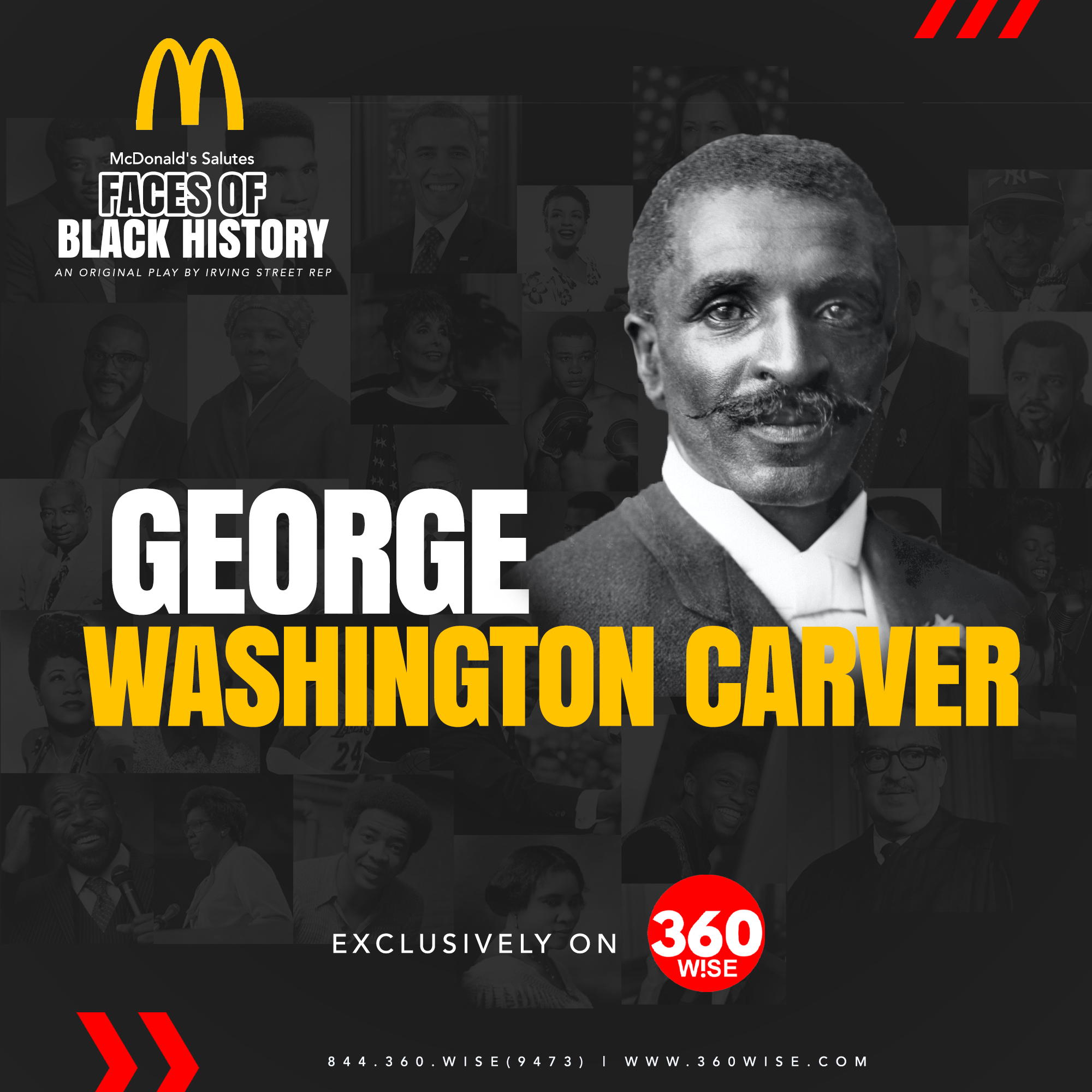