Parks was born Rosa Louise McCauley on February 4, 1913, in Tuskegee, Alabama. Her parents, James and Leona McCauley, separated when Parks was two. Parks’ mother moved the family to Pine Level, Alabama, to live with her parents, Rose and Sylvester Edwards. Both of Parks' grandparents were formerly enslaved people and strong advocates for racial equality; the family lived on the Edwards' farm, where Parks would spend her youth.  Parks' childhood brought her early experiences with racial discrimination and activism for racial equality. In one experience, Parks' grandfather stood in front of their house with a shotgun while Ku Klux Klan members marched down the street.

Throughout Parks' education, she attended segregated schools. Taught to read by her mother at a young age, Parks attended a segregated, one-room school in Pine Level, Alabama, that often-lacked adequate school supplies such as desks. African American students were forced to walk to the first through sixth-grade schoolhouse, while the city of Pine Level provided bus transportation as well as a new school building for white students.  Beginning at age 11, Parks attended the city's Industrial School for Girls in Montgomery. In 1929, while in the 11th grade and attending a laboratory school for secondary education led by the Alabama State Teachers College for Negroes, Parks left school to attend to both her sick grandmother and mother back in Pine Level.

Parks didn't return to her studies. Instead, she got a job at a shirt factory in Montgomery. After marrying in 1932, she earned her high school degree in 1933 with her husband's support.

In 1932, at age 19, Parks met and married Raymond Parks, a barber and an active member of the NAACP. After graduating high school with Raymond's support, Parks became actively involved in civil rights issues by joining the Montgomery chapter of the NAACP in 1943, serving as the chapter's youth leader as well as secretary to NAACP President E.D. Nixon — a post she held until 1957. The couple never had children.

On December 1, 1955, Parks was arrested for refusing a bus driver's instructions to give up her seat to a white passenger. She later recalled that her refusal wasn't because she was physically tired, but that she was tired of giving in. After a long day's work at a Montgomery department store, where she worked as a seamstress, Parks boarded the Cleveland Avenue bus for home. She took a seat in the first of several rows designated for "colored" passengers.

The Montgomery City Code required that all public transportation be segregated and that bus drivers had the "powers of a police officer of the city while in actual charge of any bus for the purposes of carrying out the provisions" of the code. While operating a bus, drivers were required to provide separate but equal accommodations for white and Black passengers by assigning seats.

As the bus Parks was riding continued on its route, it began to fill with white passengers. Eventually, the bus was full, and the driver noticed that several white passengers were standing in the aisle. The bus driver stopped the bus and moved the sign separating the two sections back one row, asking four Black passengers to give up their seats. The city's bus ordinance didn't specifically give drivers the authority to demand a passenger to give up a seat to anyone, regardless of color.

Three of the other Black passengers on the bus complied with the driver, but Parks refused and remained seated. The driver demanded, "Why don't you stand up?" to which Parks replied, "I don't think I should have to stand up." The driver called the police and had her arrested.  The police arrested Parks at the scene and charged her with violation of Chapter 6, Section 11, of the Montgomery City Code. She was taken to police headquarters, where, later that night, she was released on bail.

Members of the African American community were asked to stay off city buses on Monday, December 5, 1955 — the day of Parks' trial — in protest of her arrest. People were encouraged to stay home from work or school, take a cab or walk to work. With most of the African American community not riding the bus, organizers believed a longer boycott might be successful. The Montgomery Bus Boycott, as it came to be known, was a huge success, lasting for 381 days and ending with a Supreme Court ruling declaring segregation on public transit systems to be unconstitutional. Nixon began forming plans to organize a boycott of Montgomery's city buses on December 1, the evening that Parks was arrested. Ads were placed in local papers, and handbills were printed and distributed in Black neighborhoods.

On the morning of December 5, a group of leaders from the African American community gathered at the Mt. Zion Church in Montgomery to discuss strategies and determined that their boycott effort required a new organization and strong leadership. They formed the Montgomery Improvement Association (MIA), electing Montgomery newcomer King as minister of the Dexter Avenue Baptist Church. The MIA believed that Parks' case provided an excellent opportunity to take further action to create real change. When Parks arrived at the courthouse for trial that morning with her attorney, Fred Gray, she was greeted by a bustling crowd of around 500 local supporters, who rooted her on. Following a 30-minute hearing, Parks was found guilty of violating a local ordinance and was fined $10, as well as a $4 court fee.

Inarguably the biggest event of the day, however, was what Parks' trial had triggered. The city's buses were, by and large, empty. Some people carpooled and others rode in African American-operated cabs, but most of the estimated 40,000 African American commuters living in the city at the time had opted to walk to work that day — some as far as 20 miles.

Due to the size and scope of, and loyalty to, boycott participation, the effort continued for several months. The city of Montgomery had become a victorious eyesore, with dozens of public buses sitting idle, ultimately severely crippling finances for its transit company. With the boycott's progress, however, came strong resistance.

Some segregationists retaliated with violence. Black churches were burned, and both King and E.D. Nixon's homes were destroyed by bombings. Still, further attempts were made to end the boycott. The insurance was canceled for the city taxi system that was used by African Americans. Black citizens were arrested for violating an antiquated law prohibiting boycotts. In response to the ensuing events, members of the African American community took legal action. Armed with the Brown v. Board of Education decision, which stated that separate but equal policies had no place in public education, a Black legal team took the issue of segregation on public transit systems to the U.S. District Court for the Middle District of Alabama, Northern (Montgomery) Division. Parks' attorney, Fred Gray, filed the suit.

With the transit company and downtown businesses suffering financial loss and the legal system ruling against them, the city of Montgomery had no choice but to lift its enforcement of segregation on public buses, and the boycott officially ended on December 20, 1956. The combination of legal action, backed by the unrelenting determination of the African American community, made the Montgomery Bus Boycott one of the largest and most successful mass movements against racial segregation in history.

Life After the Bus Boycott

Although she had become a symbol of the Civil Rights Movement, Parks suffered hardship in the months following her arrest in Montgomery and the subsequent boycott. She lost her department store job, and her husband was fired after his boss forbade him to talk about his wife or their legal case.

Unable to find work, they eventually left Montgomery and moved to Detroit, Michigan along with Parks' mother. There, Parks made a new life for herself, working as a secretary and receptionist in U.S. Representative John Conyer's congressional office. She also served on the board of the Planned Parenthood Federation of America. In 1987, with longtime friend Elaine Eason Steele, Parks founded the Rosa and Raymond Parks Institute for Self-Development. The organization runs "Pathways to Freedom" bus tours, introducing young people to important civil rights and Underground Railroad sites throughout the country.

In 1992, Parks published Rosa Parks: My Story, an autobiography recounting her life in the segregated South. In 1995, she published Quiet Strength, which includes her memoirs and focuses on the role that religious faith played throughout her life.

In 1998, the hip-hop group Outkast released a song, “Rosa Parks,” which shot up to the top 100 on the Billboard music charts the following year. The song featured the chorus: "Ah-ha, hush that fuss. Everybody move to the back of the bus."

In 1999, Parks filed a lawsuit against the group and its label alleging defamation and false advertising because Outkast used Parks’ name without her permission. Outkast said the song was protected by the First Amendment and did not violate Parks’ publicity rights. In 2003, a judge dismissed the defamation claims. Parks’ lawyer soon refiled based on the false advertising claims for using her name without permission, seeking over $5 billion.

When Did Rosa Parks Die?

On October 24, 2005, Parks quietly died in her apartment in Detroit, Michigan at the age of 92. She had been diagnosed the previous year with progressive dementia, which she had been suffering from since at least 2002. Parks' death was marked by several memorial services, among them, lying in honor at the Capitol Rotunda in Washington, D.C., where an estimated 50,000 people viewed her casket. She was interred between her husband and mother at Detroit's Woodlawn Cemetery, in the chapel's mausoleum. Shortly after her death, the chapel was renamed the Rosa L. Parks Freedom Chapel.

Parks received many accolades during her lifetime, including the Spingarn Medal, the NAACP's highest award, and the prestigious Martin Luther King Jr. Award.

On September 15, 1996, President Bill Clinton awarded Parks the Presidential Medal of Freedom, the highest honor given by the United States' executive branch. The following year, she was awarded the Congressional Gold Medal, the highest award given by the U.S. legislative branch.  TIME magazine named Parks on its 1999 list of "The 20 Most Influential People of the 20th Century.”

In 2000, Troy University created the Rosa Parks Museum, located at the site of her arrest in downtown Montgomery, Alabama. In 2001, the city of Grand Rapids, Michigan, consecrated Rosa Parks Circle, a 3.5-acre park designed by Maya Lin, an artist and architect best known for designing the Vietnam War Memorial in Washington, D.C.  Movie on Rosa Parks' Life A biographical movie starring Angela Bassett and directed by Julie Dash, The Rosa Parks Story, was released in 2002. The movie won the 2003 NAACP Image Award, Christopher Award and Black Reel Award.

February 4, 2013 marked what would have been Parks' 100th birthday. In celebration, a commemorative U.S. Postal Service stamp, called the Rosa Parks Forever stamp and featuring a rendition of the famed activist, debuted.

Also, in February 2013, President Barack Obama unveiled a statue designed
by Robert Firmin and sculpted by Eugene Daub honoring Parks in the nation’s Capital building. He remembered Parks, according to The New York Times, by saying "In a single moment, with the simplest of gestures, she helped change America and change the world. . . . And today, she takes her rightful place among those who shaped this nation’s course." 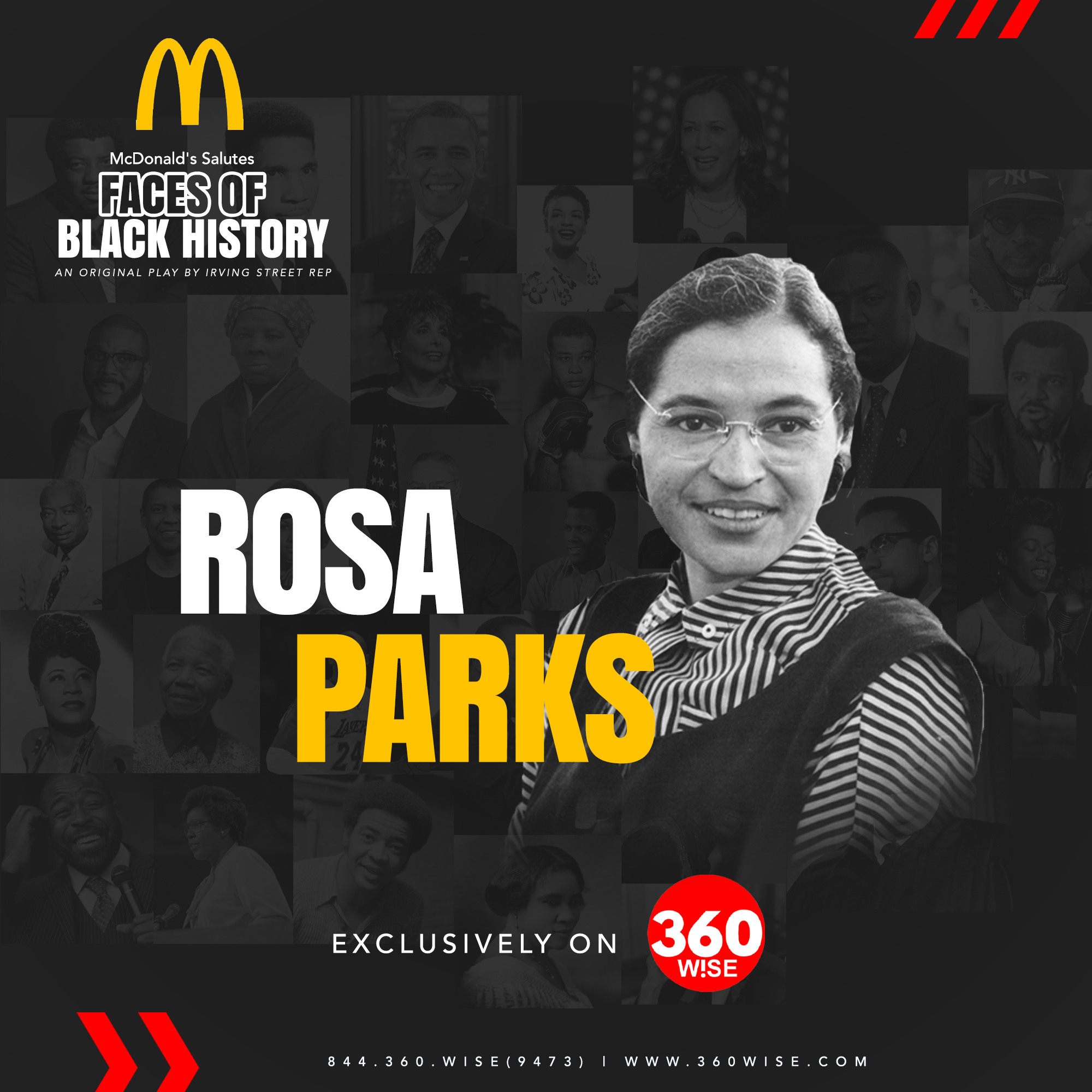 • Parks was born Rosa Louise McCauley on February 4, 1913, in Tuskegee, Alabama.
• On December 1, 1955, Parks was arrested for refusing a bus driver's instructions to give up her seat to a white passenger.
• The Montgomery Bus Boycott, as it came to be known, was a huge success, lasting for 381 days and ending with a Supreme Court ruling declaring segregation on public transit systems to be unconstitutional.