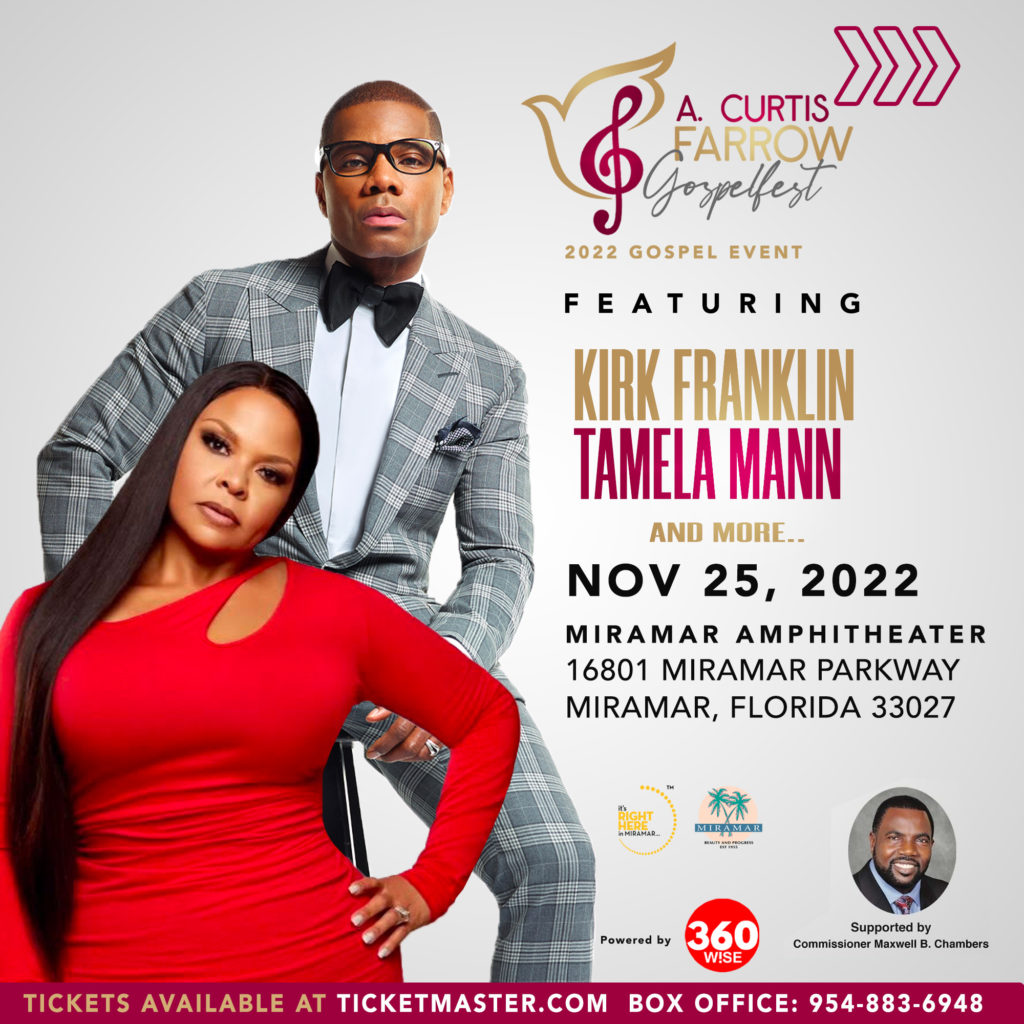 Two of The Most Powerful Voices in Gospel Music, One Stage, One Night Only, Kirk Franklin, and Tamela Mann!

The Stellar Gospel line up Kirk Franklin and Tamela Mann3 Time Emmy Award-winning Producer and Director, A. Curtis Farrow presents; One Night Only at the Miramar Amphitheater on Black Friday, November 25, 2022, featuring two of Gospel Music’s Most PowerfulVoices, Kirk Franklin, and Tamela Mann. Kirk Franklin is One of contemporary gospel music’s brightest and most enduring stars, singer, songwriter, and producer. He has won numerous awards, including 16 Grammy Awards and 22Dove Awards.

Tamela Mann a contemporary gospel singer is known for her strong, powerful, and anointed soprano singing voice. Tamela is also an actress, she has starred in many of Tyler Perry’s movies, stage plays and television sitcom “Meet the Browns” where she’s best known for her starring role as Cora. She is a recipient of several awards including a Grammy Award.

The A. Curtis Farrow’s Gospelfest will be an uplifting, life-changing, and soul-stirring event for the entire family. A perfect way to give thanks and celebrate Thanksgiving weekend, says Robert Alexander CEO of 360WiSE.

The line-up includes: Kirk FranklinKirk Franklin, one of contemporary gospel music’s brightest and most enduring stars, singer, songwriter, and producer Kirk Franklin emerged in the early ’90s leading the Texas-based choir the Family, whose platinum-selling debut, Kirk Franklin &amp; the Family (1993), proved not only to be a chart-topping gospel success but crossed over to the R&B and pop charts as well.

This broad appeal would prove to be a recurring theme in Franklin’s collaborations with the Family (1996’s Whatcha Lookin For) and another choir, God’s Property (1998’s The Nu Nation Project), as well as in his subsequent solo career, which he started with The Rebirth of Kirk Franklin (2002). Franklin’s fondness for collaborations within secular and Christian music circles, and his innate knack for combining charismatic gospel with R&B and hip-hop, have continued to appeal to a wide audience. He remains a perennial chart success and a frequent Grammy winner, proven repeatedly with Top 20, award-winning albums such as Hero (2005), Hello Fear (2011), Losing My Religion (2015), and Long Live Love (2019). Kingdom Book One (2022), his collaboration with Maverick City Music brought attention to mass incarceration.

Tamela Mann Tamela Mann, Contemporary gospel singer is known for her strong and powerful soprano singing voice. Beginning her professional life as a member of Kirk Franklin’s vocal stable, she acted in Tyler Perry projects, including starring as Cora on TV’s “Meet the Browns”, while embarking on a solo singing career. She updated the faith-based gospel sound established on 2005’s  Gotta Keep Movin’  with contemporary R&B touches on 2009’s The Master Plan then hit a career-high number 14 on the Billboard 200, with the gospel number one Best Days in 2012 which included her hit song titled “Take Me To The King.” Her fifth solo album, 2021’s Overcomer, included appearances by the likes of Franklin, Wyclef Jean, and Todd Dulaney.

About Producer, Director A. Curtis FarrowMr. Farrow is a 3 Time Emmy Award Winning Producer and Director of McDonald’s Gospelfest 2000, 2001and most recently for McDonald’s Gospelfest 2021. He has 16 nominations which started in 2003, 2005,2006, 2007, 2008, 2011 through 2014, 2016, 2017, 2018, 2019, and 2021. In February 2014, Mr. Farrowfulfilled a longtime dream by organizing and leading 1171 voices to break the Guinness World Record forWorld&#39;s Largest Gospel Choir. He has since produced a 2000 voice choir at Madison Square Garden and a 5000-voice choir at the Nassau Coliseum. he was responsible for the organization, planning, and execution of the homegoing services for the Late Whitney Houston, and most recently he produced the homegoing services for the Late Aretha Franklin which was seen around the world. Mr. Farrow credits everything in his life to his strong belief in God.