Bill “Bojangles” Robinson was born Luther Robinson in Richmond, Virginia, on May 25, 1878. His father, Maxwell, worked in a machine shop, while his mother, Maria, was a choir singer. After both of his parents died in 1885, Robinson was raised by his grandmother, Bedilia, who had been an enslaved person earlier in her life. According to Robinson, he used physical force to compel his brother, Bill, to switch names with him, since he did not care for his given name of Luther. Additionally, as a young man, he earned the nickname “Bojangles” for his contentious tendencies.
Dancing and Acting Career
At the age of 5, Robinson began dancing for a living, performing in local beer gardens. In 1886, at the age of 9, he joined Mayme Remington’s touring troupe. In 1891, he joined a traveling company, later performing as a vaudeville act. He achieved great success as a nightclub and musical-comedy performer. At this stage of his career, he performed almost exclusively in black theaters before black audiences.

In 1908, Robinson met Marty Forkins, who became his manager. Forkins urged Robinson to develop his solo act in nightclubs. Robinson took a break from performance to serve as a rifleman in World War I. Along with fighting in the trenches, Robinson was also a drum major who led the regimental band up Fifth Avenue upon the regiment’s return from Europe.

In 1928, he starred on Broadway in the hugely successful musical revue Blackbirds of 1928, which featured his famous “stair dance.” Blackbird was a revue starring African American performers, intended for white audiences. The show was a breakthrough for Robinson. He became well known as “Bojangles,” which connoted a cheerful and happy-go-lucky demeanor for his white fans, despite the nearly polar-opposite meaning of the nickname in the black community. His catchphrase, “Everything’s copacetic,” reinforced Robinson’s sunny disposition. Although he worked regularly as an actor, Robinson was best known for his tap-dance routines. He pioneered a new form of tap, shifting from a flat-footed style to a light, swinging style that focused on elegant footwork.

Robinson’s fame withstood the decline of African American revues. He starred in 14 Hollywood motion pictures, many of them musicals, and played multiple roles opposite the child star Shirley Temple. His film credits include Rebecca of Sunnybrook Farm, The Little Colonel, and Stormy Weather, co-starring Lena Horne and Cab Calloway. Despite his fame, Robinson was not able to transcend the narrow range of stereotypical roles written for black actors at the time. By accepting these roles, Robinson was able to maintain steady employment and remain in the public eye. In 1939, at the age of 61, he performed in The Hot Mikado, a jazz-inspired interpretation of Gilbert and Sullivan’s operetta. Robinson celebrated his 61st birthday publicly by dancing down 61 blocks of Broadway.
Personal Life
Robinson was married three times. His 1907 marriage to Lena Chase ended in 1922. He married his second wife, Fannie S. Clay, in 1922. Clay served as her husband’s manager and assisted him in founding the Negro Actors Guild of America, which advocated for the rights of African American performers. Clay and Robinson divorced in 1943. In 1944, he married Elaine Plaines. Robinson and Plaines were together until Robinson’s death in 1949.

Robinson was involved in baseball as well as theater. In 1936, He co-founded the New York Black Yankees team, based in Harlem, with financier James Semler. The team was a part of the Negro National League until 1948 when Major League Baseball first integrated racially.

Despite earning millions during his lifetime, Robinson died poor in 1949, at the age of 71. Much of his wealth went to charities in Harlem and beyond before his death. Robinson’s funeral, arranged by longtime friend and television host Ed Sullivan, was held at the 369th Infantry Regiment Armory and attended by thousands, including many stars from the entertainment industry. A eulogy by Adam Clayton Powell Sr. (father of Congressman Adam Clayton Powell Jr.) was broadcast over the radio. Robinson was buried in the Cemetery of the Evergreens in Brooklyn, New York.

Robinson remained a well-known figure after his death, particularly in dance circles. In 1989, a joint congressional resolution established National Tap Dance Day on May 25, Robinson’s birthday. Additionally, a public park in Harlem bears Robinson’s name — a way of honoring his charitable contributions and participation in the neighborhood’s civic life. 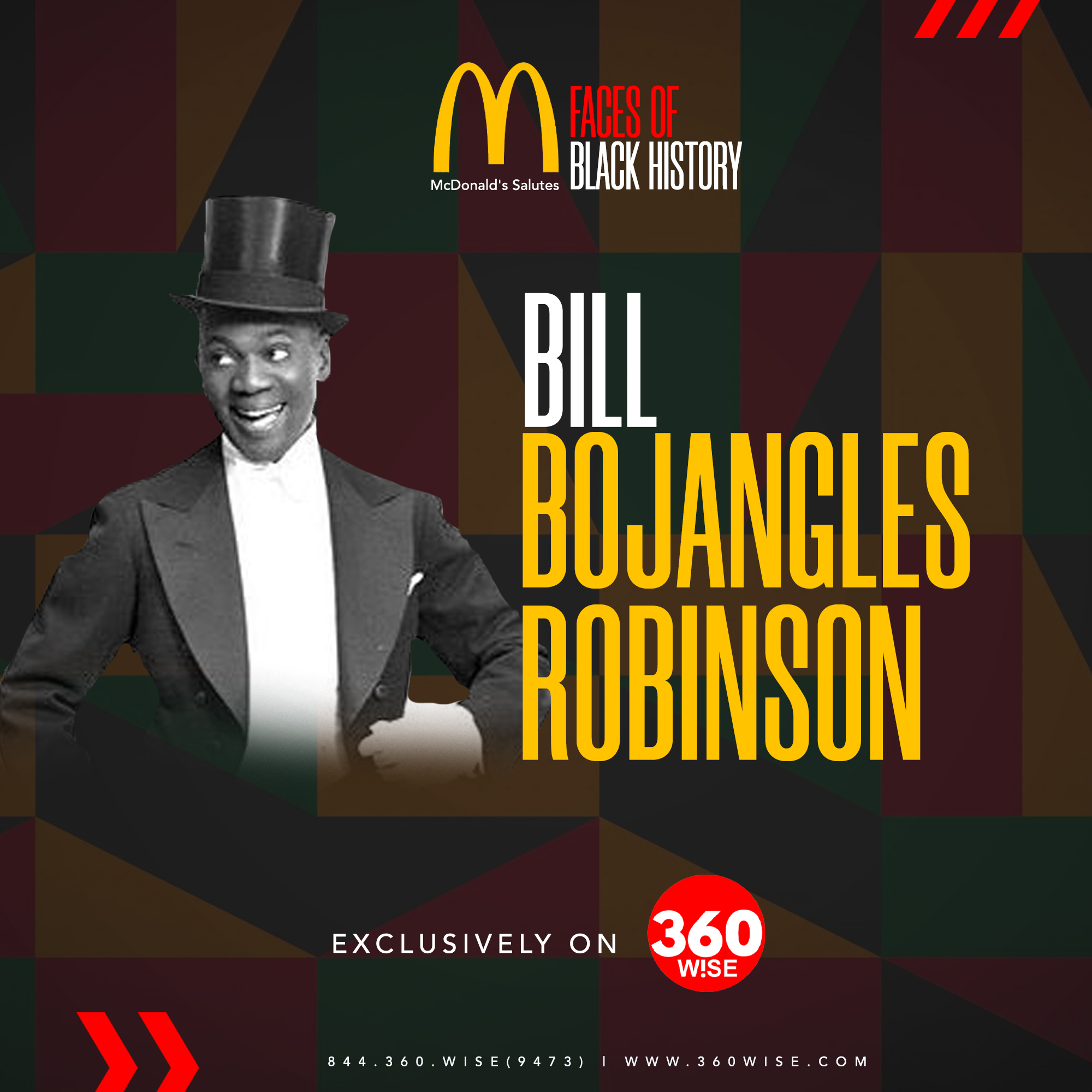