Who Is Michelle Obama?

Michelle was born Michelle LaVaughn Robinson on January 17, 1964, in Chicago, Illinois. Michelle’s father, Fraser Robinson, was a city-pump operator and a Democratic precinct captain. Her mother, Marian, was a secretary at Spiegel’s but later stayed home to raise Michelle and her older brother, Craig. At just 21 months apart in age, Craig and Michelle were often mistaken for twins.

The Robinson family lived in a small bungalow on Chicago’s South Side. Michelle and Craig shared quarters, sleeping in the living room with a sheet serving as a makeshift room divider. They were a close-knit family, typically sharing meals, reading and playing games together.

Michelle was born Michelle LaVaughn Robinson on January 17, 1964, in Chicago, Illinois. Michelle’s father, Fraser Robinson, was a city-pump operator and a Democratic precinct captain. Her mother, Marian, was a secretary at Spiegel’s but later stayed home to raise Michelle and her older brother, Craig. At just 21 months apart in age, Craig and Michelle were often mistaken for twins.

The Robinson family lived in a small bungalow on Chicago’s South Side. Michelle and Craig shared quarters, sleeping in the living room with a sheet serving as a makeshift room divider. They were a close-knit family, typically sharing meals, reading and playing games together.

Raised with an emphasis on education, both Michelle and her brother learned to read at home by age four. Both skipped the second grade. By the sixth grade, Michelle was taking classes in her school’s gifted program, where she learned French and completed accelerated courses in biology.

Michelle went on to attend Whitney M. Young Magnet High School, the city’s first magnet high school for gifted children, where, among other activities, she served as the student government treasurer. In 1981, she graduated from the school as class salutatorian.

Michelle and Barack married at Trinity United Church of Christ on October 3, 1992. They met in 1989, at Michelle’s first job as a lawyer at the Chicago firm Sidley Austin. Her future husband, Barack, was a summer intern to whom Michelle was assigned as an adviser.

Initially, Michelle refused to date Barack, believing that their work relationship would make the romance improper. She eventually relented, however, and the couple soon fell in love. After two years of dating, Barack proposed.

Michelle first caught the eye of a national audience while at her husband’s side when he delivered a high-profile speech at the Democratic National Convention in 2004. Barack was elected as U.S. Senator from Illinois that November.

In 2007, Michelle scaled back her own professional work to attend to family and campaign obligations during Barack’s run for the Democratic presidential nomination. When they were out on the trail, they would leave their daughters with their grandmother Marian, Michelle’s mother.

Barack eventually won the nomination and was elected the 44th President of the United States. He was inaugurated on January 20, 2009.

When her husband sought reelection in 2012, facing a challenging race against Republican presidential nominee Mitt Romney, Michelle diligently campaigned on his behalf. She traveled the country, giving talks and making public appearances.

On November 6, 2012, Barack was re-elected for a second term as U.S. president. After Mitt Romney conceded defeat, Michelle accompanied her husband with their two daughters, Malia and Sasha, onto the stage at McCormick Place in Chicago, where President Obama delivered his victory speech.

Career in Lawyer and Public Service

After graduating law school in 1988, Michelle worked as an associate in the Chicago branch of the firm Sidley Austin in the area of marketing and intellectual property.

In 1991, she left corporate law to pursue a career in public service, working as an assistant to Mayor Richard Daley and then as the assistant commissioner of planning and development for the City of Chicago.

In 1993, Michelle became executive director for the Chicago office of Public Allies, a nonprofit leadership-training program that helped young adults develop skills for future careers in the public sector.

In May 2005, Michelle was appointed vice president for community and external affairs at the University of Chicago Medical Center, where she continued to work part-time until shortly before her husband’s inauguration as president. She also served as a board member for the prestigious Chicago Council on Global Affairs.”

Throughout her career, Michelle has given a number of powerful speeches. A few of the most notable include:

2012 Democratic National Convention, September 4, 2012
In September 2012, Michelle delivered a noteworthy speech at the Democratic National Convention. “Every day, the people I meet inspire me, every day they make me proud, every day they remind me how blessed we are to live in the greatest nation on earth,” she said. “Serving as your first lady is an honor and a privilege.”

She went on to praise the Latino community for supporting President Obama and stated that her husband—”the same man [she] fell in love with all those years ago”—understands the American Dream, as well as the everyday struggles of American families, and cares deeply about making a difference in people’s lives. Michelle won both public and critical praise for her narrative, called a “shining moment” by The Washington Post.

2016 Democratic National Convention, July 25, 2016
In July 2016, Michelle campaigned in support of former first lady, senator and secretary of state Hillary Clinton, who became the official Democratic nominee for the American presidency and the first woman in the U.S. to win a major political party’s presidential nomination. On the first night of the Democratic National Convention, Michelle spoke in support of Clinton, who had previously run against Barack during the 2008 primaries, and her vision of a progressive America.

“…I wake up every morning in a house that was built by slaves, and I watch my daughters, two beautiful, intelligent, Black young women, playing with their dogs on the White House lawn,” she said. “And because of Hillary Clinton, my daughters, and all our sons and daughters, now take for granted that a woman can be president of the United States.”

Michelle continued to campaign for Clinton, speaking out forcefully against the campaign of Republican candidate Donald Trump, who went on to win the presidential election.

Final Speech as First Lady, January 13, 2017
On January 13, 2017, Michelle made her final speech as first lady at the White House, saying “being your first lady has been the greatest honor of my life and I hope I’ve made you proud.” 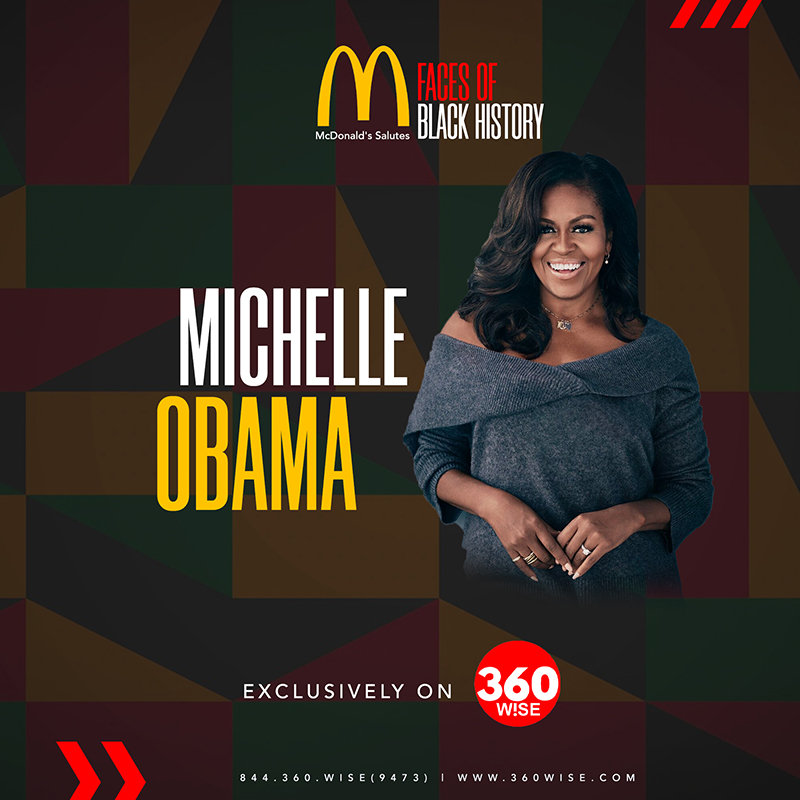 Thank you to the New York Tristate Owner and Operators Association for your continued support of the Black Community. All featured faces of Black History are not captured in the 2022 theatre production.