Marshall was born on July 2, 1908, in Baltimore, Maryland. His father, William Marshall, was the grandson of an enslaved person who worked as a steward at an exclusive club, and his mother, Norma, was a kindergarten teacher. One of William’s favorite pastimes was to listen to cases at the local courthouse before returning home to rehash the lawyers’ arguments with his sons. Thurgood later recalled, “Now you want to know how I got involved in law? I don’t know. The nearest I can get is that my dad, my brother and I had the most violent arguments you ever heard about anything. I guess we argued five out of seven nights at the dinner table.”

Marshall attended Baltimore’s Colored High and Training School (later renamed Frederick Douglass High School), where he was an above-average student and put his finely honed skills of argument to use as a star member of the debate team. The teenage Marshall was also something of a mischievous troublemaker. His greatest high school accomplishment, memorizing the entire United States Constitution, was actually a teacher’s punishment for misbehaving in class.

After graduating from Lincoln with honors in 1930, Marshall applied to the University of Maryland Law School. Despite being overqualified academically, Marshall was rejected because of his race. This firsthand experience with discrimination in education made a lasting impression on Marshall and helped determine the future course of his career.

Instead of Maryland, Marshall attended law school in Washington, D.C. at Howard University, another historically Black school. The dean of Howard Law School at the time was the pioneering civil rights lawyer Charles Houston. Marshall quickly fell under the tutelage of Houston, a notorious disciplinarian and extraordinarily demanding professor. Marshall recalled of Houston, “He would not be satisfied until he went to a dance on the campus and found all of his students sitting around the wall reading law books instead of partying.” Marshall graduated magna cum laude from Howard in 1933. He briefly attempted to establish his own practice in Baltimore, but without experience, he failed to land any significant cases.

In 1934, Marshall began working for the Baltimore branch of the National Association for the Advancement of Colored People (NAACP). In 1936, Marshall moved to New York City to work full time as legal counsel for the NAACP. Over several decades, Marshall argued and won a variety of cases to strike down many forms of legalized racism, helping to inspire the American civil rights movement.

In one of Marshall’s first cases — which he argued alongside his mentor, Charles Houston — he defended another well-qualified undergraduate, Donald Murray, who like himself had been denied entrance to the University of Maryland Law School. Marshall and Houston won Murray v. Pearson in January 1936, the first in a long string of cases designed to undermine the legal basis for de jure racial segregation in the United States.

Marshall’s first victory before the Supreme Court came in Chambers v.Florida (1940), in which he successfully defended four Black men who had been convicted of murder on the basis of confessions coerced from them by police.

Another crucial Supreme Court victory for Marshall came in the 1944 case of Smith v. Allwright, in which the Court struck down the Democratic Party’s use of white people-only primary elections in various Southern states.

Brown v. Board of Education

The great achievement of Marshall’s career as a civil-rights lawyer was his victory in the landmark 1954 Supreme Court case Brown v. Board of Education of Topeka. The class-action lawsuit was filed on behalf of a group of Black parents in Topeka, Kansas, whose children were forced to attend all-Black segregated schools. Through Brown v. Board, one of the most important cases of the 20th century, Marshall challenged head-on the legal underpinning of racial segregation, the doctrine of “separate but equal” established by the 1896 Supreme Court case Plessy v. Ferguson.

On May 17, 1954, the Supreme Court unanimously ruled that “separate educational facilities are inherently unequal,” and therefore racial segregation of public schools violated the equal protection clause of the 14th Amendment.  While enforcement of the Court’s ruling proved to be uneven and painfully slow, Brown v. Board provided the legal foundation, and much of the inspiration, for the American civil rights movement that unfolded over the next decade. At the same time, the case established Marshall as one of the most successful and prominent lawyers in America.

In 1961, newly-elected President John F. Kennedy appointed Marshall as a judge for the U.S. Second Circuit Court of Appeals. Serving as a circuit court judge over the next four years, Marshall issued more than 100 decisions, none of which was overturned by the Supreme Court. In 1965, Kennedy’s successor, Lyndon B. Johnson, appointed Marshall to serve as the first Black U.S. solicitor general, the attorney designated to argue on behalf of the federal government before the Supreme Court. During his two years as solicitor general, Marshall won 14 of the 19 cases that he argued before the Supreme Court.

In 1967, President Johnson nominated Marshall to serve on the bench before which he had successfully argued so many times before the United States Supreme Court. On October 2, 1967, Marshall was sworn in as a Supreme Court justice, becoming the first African American to serve on the nation’s highest court. Marshall joined a liberal Supreme Court headed by Chief Justice Earl Warren, which aligned with Marshall’s views on politics and the Constitution.

As a Supreme Court justice, Marshall consistently supported rulings upholding strong protection of individual rights and liberal interpretations of controversial social issues. He was part of the majority that ruled in favor of the right to abortion in the landmark 1973 case Roe v. Wade, among several other cases. In the 1972 case Furman v. Georgia, which led to a de facto moratorium on the death penalty, Marshall articulated his opinion that the death penalty was unconstitutional in all circumstances.

Throughout Marshall’s 24-year tenure on the Court, Republican presidents appointed eight consecutive justices, and Marshall gradually became an isolated liberal member of an increasingly conservative Court. For the latter part of his time on the bench, Marshall was largely relegated to issuing strongly-worded dissents, as the Court reinstated the death penalty and limited affirmative action measures and abortion rights. Marshall retired from the Supreme Court in 1991; Justice Clarence Thomas replaced him.

Marshall married Vivian “Buster” Burey in 1929, and the couple remained married until her death in 1955. Shortly thereafter, Marshall married Cecilia Suyat, his secretary at the NAACP. The couple had two sons together, Thurgood Jr. and John Marshall.

Marshall stands alongside Martin Luther King Jr. and Malcolm X as one of the greatest and most important figures of the American civil rights movement. Although he may be the least popularly celebrated of the three, Marshall was arguably the most instrumental in the movement’s achievements toward racial equality.

Marshall’s strategy of attacking racial inequality through the courts represented a third way of pursuing racial equality, more pragmatic than King’s soaring rhetoric and less polemical than Malcolm X’s strident separatism. In the aftermath of Marshall’s death, an obituary read: “We make movies about Malcolm X, we get a holiday to honor Dr. Martin Luther King, but every day we live with the legacy of Justice Thurgood Marshall.”

In 2017, the biopic film Marshall was released. Starring Chadwick Boseman, Josh Gad and Kate Hudson, the movie focuses on an obscure 1941 rape case brought by Eleanor Strubing, a 32-year-old white woman, against her 32-year-old Black chauffeur, Joseph Spell. While Spell initially confessed to the crime after 16 hours of interrogation, he later said the encounter was consensual. During the trial, the judge allowed Marshall to assist his white co-attorney but banned him from speaking a single word. Following 12 hours of deliberation, the jury of six men and six women came back with a not guilty verdict. 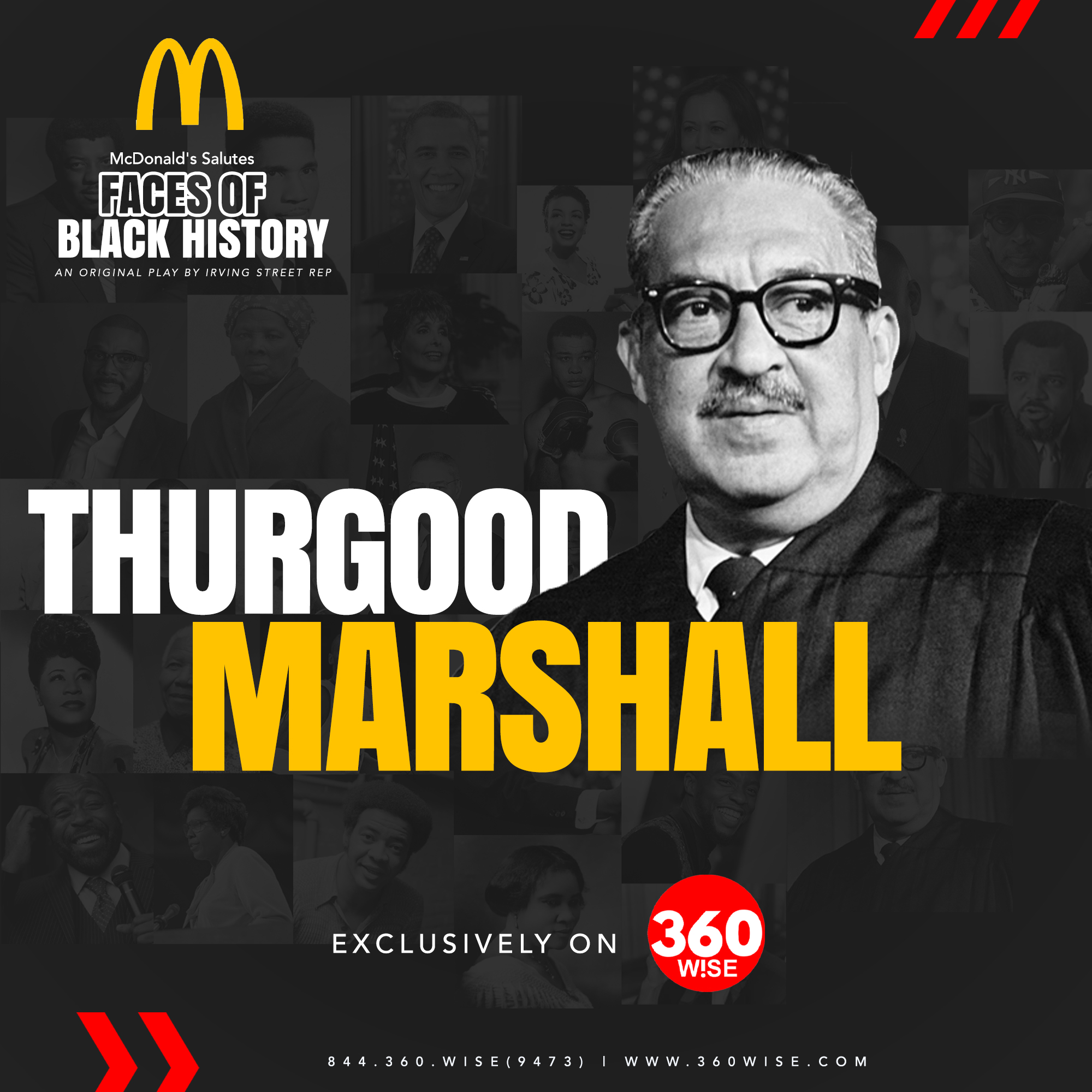