Kurt Carr was born in  Hartford, Connecticut, on October 12, 1964 where he grew up in a family who believed in Jesus, but was not deeply involved in church. At the age of 13, Kurt found himself being increasingly drawn to the church. In his early teen years, he performed as an actor and dancer at the Hartford Stage Company in a Broadway musical called On the Town, which was directed by Clay Stevenson. He became an active member in his church’s music department.

At age 14 his family moved steps away from the Hopewell Baptist Church.  One life changing Sunday Kurt walked to the church alone. Eventually, one by one his family became frequent church goers. He credits this to Gods Purpose and calling on his life to draw others to God.

At the age of 17, Carr realized that he was being called to do something even higher with his life. After high school, he entered into the music program at the University of Connecticut, where he studied classical music and earned a Fine Arts degree. Carr is a member of Phi Beta Sigma fraternity.

After Graduating High School with Honors, Carr went on to The University of Connecticut where he studied classical voice and piano. It is evident that his musical education is the catalyst behind his very eclectic musical range. He’s a musical chameleon that can seemingly do any style of music. Carr has performed his music in European cathedrals, in store front churches, and in some of the most prestigious venues in the world The White House, The Kennedy Center, Radio City Music Hall, Lincoln Center, The Hollywood Bowl, and Carnegie Hall.

Kurt Carr’s career changing moment came when the Rev. James Cleveland, renowned as the King of Gospel music, heard his amazing talent during the Gospel Music Workshop of America. Little did Carr know that Cleveland’s’ Music Director, Pastor Calvin Bernard Rhone had just given Cleveland his resignation because, he was going into full time pastoring.  Kurt Carr was literally in the right place at the right time. Within 5 months he relocated to Los Angeles, California and became the new Musical Director, traveling the world with the Legendary Rev. James Cleveland until his untimely passing in 1991.

Carr was piano accompanist for Andrae Crouch‘s music ministry for one year. Carr was subsequently hired to be musical director and pianist for Rev. James Cleveland’s ministry and was employed there for seven years, until Cleveland’s death. Eventually, Carr became director of the West Angeles Church of God in Christ Choir, where he had the opportunity to work with both gospel and secular musical artists, including Stevie Wonder, Gladys Knight, Yolanda Adams and Kirk Franklin. In 1987 while in Los Angeles, Carr formed a six-member gospel vocal ensemble called The Kurt Carr Singers. They released their first album in 1988. Years later Light Records in 1991. The singers released major-label debut Together which was recorded live a few months after Rev. James Cleveland’s death. Light Records eventually had problems however, Kurt Carr met Vicki Mack who is the owner of GospoCentric Records. In 1994, the group released their first album on Gospocentric titled Serious About It.

The album introduced the Background Choir called the Choir of Life which features members from West Angeles Cogic. The album also featured a sample of Salt-N-Peppa’s Whatta Man in which a tour with Kirk Franklin & The Family began shortly after that as they joined along the tour. In July 1996, the singers had a live recording at West Angeles church for their album No One Else which was released in March 1997 in which Anastacia, Mary Mary, & Andrea McClurkin-Mellini (who is the sister of Donnie McClurkin) sung additional background vocals. The album features popular hits like For Every Mountain and The Lord Strong & Mighty.

In 2000, The group now known as Kurt Carr & The Kurt Carr Singers released their blockbuster Awesome Wonder which featured In the Sanctuary which also won awards. Kurt Carr was featured on the Kingdom Come Soundtrack in 2001. Years later after GospoCentric became owned by Zomba Label Group, Kurt Carr releases the One Church Project which was known for God Blocked It and God Great God. The theme of the album was about being a multicultural church In 2008, after GospoCentric Folded, Kurt Carr released his first two-disc album Just the Beginning which was released on his self-titled label Kurt Carr Gospel which was owned by Zomba. The group also grew to seven members.

Carr’s music is a blend of traditional gospel composition and vocals, with elements of R&B, jazz, soul, blues, and the distinct modern harmonies and singing styles found in urban contemporary gospel. The Kurt Carr Singers under his direction and musical influence have created seven albums. Kurt Carr has won four Stellar Awards.

Carr’s next blessing was becoming Creative Music Director of music for the West Angeles Church of God in Christ where Bishop Charles E. Blake is Pastor. This Church is widely recognized for Bishop Blake’s unparalleled Integrity and Leadership. West Angeles is also considered the birthplace of the Praise and Worship sound in the Black church. With a string of successful CDs entitled Saints In Praise, West Angeles’ Music department changed the way African American musicians and singers approached Sunday Morning Music. Carr was blessed to be a part of that revolutionary music ministry.

During his time at West Angeles Kurt directed the 300 voice Choir Sunday after Sunday.

He also worked alongside some of the West Angeles Church members who just so happen to be some of the Worlds most respected Artists…. Gladys Knight who calls Carr her little brother, Stevie Wonder, Natalie Cole, Stephanie Mills, Denzel and Pauletta Washington, Lynn Whitfield and many more…Carr along with these legends produced some spectacular concerts at the church that helped raise funds to build the monumental West Angeles Cathedral. During his season at West Angeles Kurt worked also with Paul Skorich a gifted commercial writer, together they went on to do music for more than 50 commercials and major television advertisements. With over 20 years of experience in the Gospel Music World Kurt Carr has

delivered some of the most greatly recognized songs in recent history.  His songs are singing in Christian churches worldwide by every race, color, and creed.  Including

The Presence of the Lord Is Here, I Almost Let Go, I Never Lost My Praise,

God Great God, Be Blessed, For Every Mountain which won a Grammy when recorded by Brooklyn Tabernacle Choir, and We Lift Our Hands In The Sanctuary which was the breakout SMASH hit from the RIAA Certified GOLD CD Awesome Wonder, which to date has sold close to a million units.

Carr has garnered 10 Stellar Awards, 1 GMA Dove Award, he has been inducted into the Gospel Music Hall of Fame, he has 2 Grammy Nominations, Special Honors Award given by his Fraternity Phi Beta Sigma Inc. Kurt was recently given the Extremely prestigious BMI Trail Blazer Award alongside his heroes Edwin and Tramaine Hawkins.  He has also received top Honor at The 28th Annual Stellar Awards by receiving The James Cleveland Lifetime Achievement Award. He also has received 2 honorary doctorate degrees.

His most recent release Bless Somebody Else is a 16-track compilation of what is being called some of his greatest work. It features the amazing Kurt Carr Singers. Bless Somebody Else, the title track features an amazing cast of gospel and mainstream A-listers – Wes Morgan, Faith Evans, Fred Hammond, Yolanda Adams, Pastor Smokie Norful, Erica Campbell, Pastor John P Kee, Jekaylan Carr, Bishop Paul Morton, Keke Wyatt, Zacardi Cortez and Bishop TD Jakes.

In addition to his own release, Kurt Carr recently penned and produced the hit song Good Favor for the legendary Clark Sisters.

Carr believes his assignment in this season if his life is to be a blessing to others and to cause the people of the world to be more compassionate towards each other. This is what the Gospel is all about LOVE. If I can help somebody, then my living shall not be in vain. 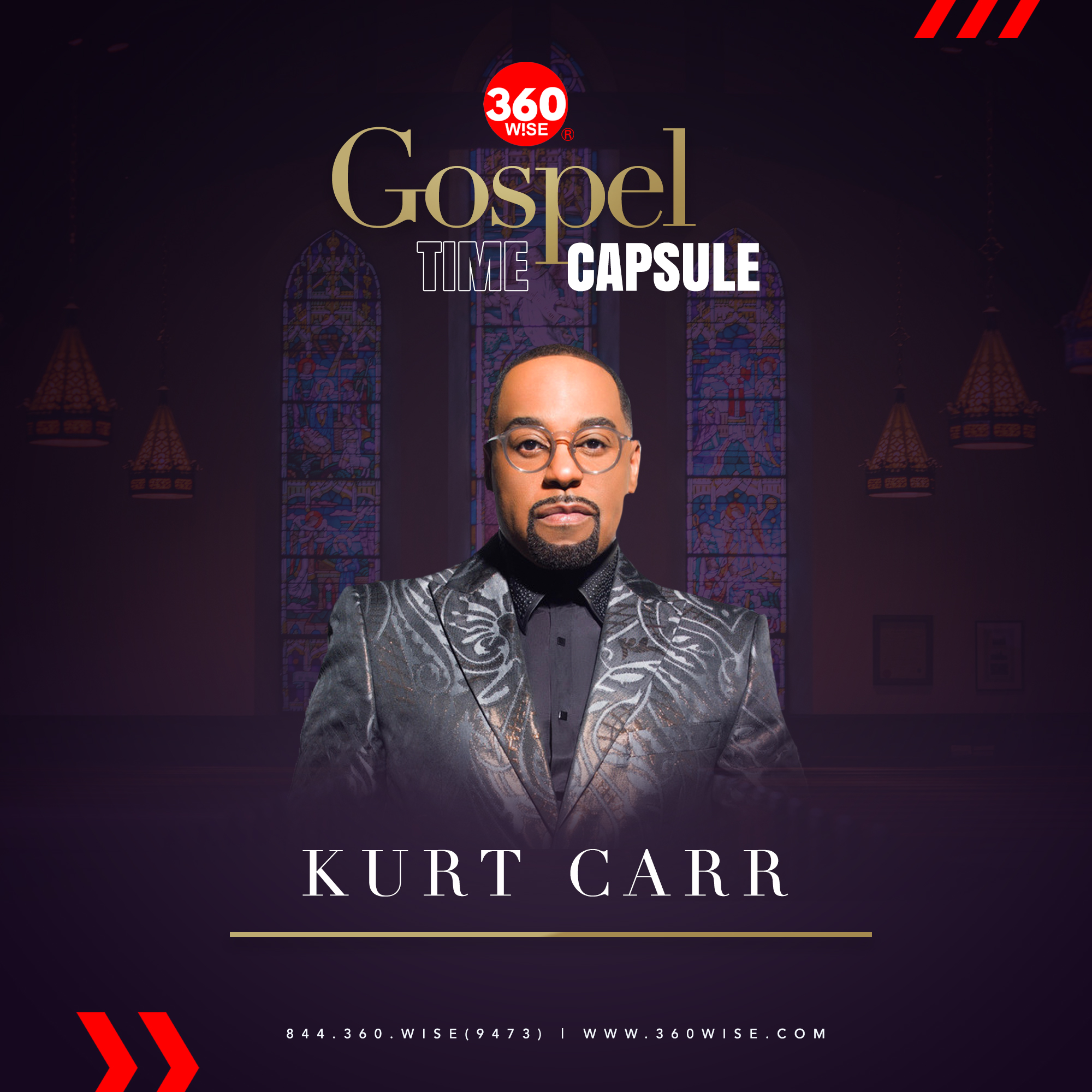